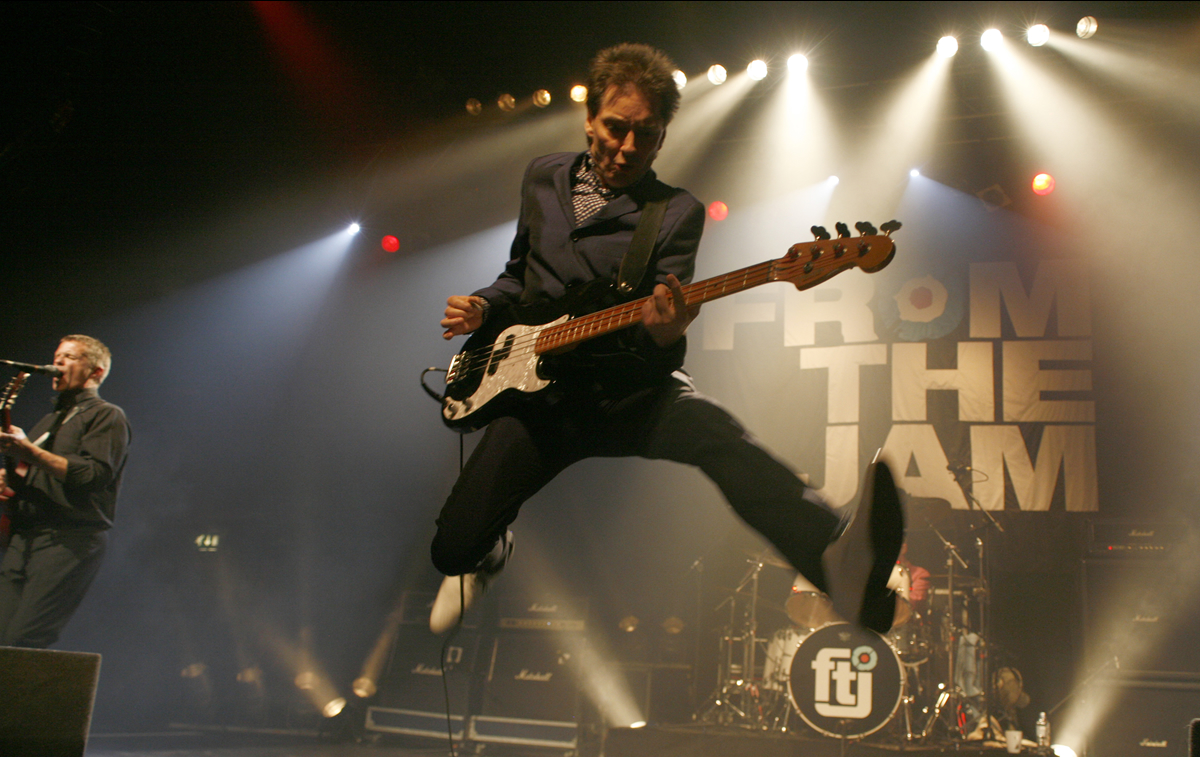 1972 saw one of the most influential and legendary bands in the history of rock music emerge, as three ordinary guys from Woking in Surrey juxtaposed punk rock anger with R&B influences and the dapper aesthetics of 60s mod culture, creating the unstoppable musical force of The Jam. Over ten years, the three piece – comprised of drummer Rick Buckler, frontman Paul Weller and bass player Bruce Foxton – forged a timeless legacy of widespread emotional resonance, with a variety of accomplishments ranging from 18 consecutive top 40 UK singles to four UK number one singles and a UK number one album. Providing all the power and low-end that helped to initially propel the trio into the stratosphere, Foxton gave The Jam half of an integral component to their success: an energetic rhythm section. Driving the band’s enduring appeal into the hearts and minds of all who witnessed it first hand, Foxton’s bass rounded out Weller’s songs, throughout a career that weaved its place into the historical tapestry of both musical culture and British culture as a whole.

After a farewell tour and subsequent break up in 1982, the members went their separate ways. Weller formed The Style Council and later became a solo artist, while Buckler formed the short-lived Time UK. Foxton – however – took a different path. After gaining experience in The Jam fronting ‘David Watts’ (a cover of The Kinks) and ëNews Of The World’ (one of his own compositions) he stepped out solo and scored a hit single with ‘Freak’.

Foxton then got a call from frontman Jake Burns of Belfast punk rock legends Stiff Little Fingers and consequently played bass with them for the following fifteen years. He featured on four SLF albums: ëFlagsí and ëEmblemí, ëGet A Lifeí, ëTinderboxí and ëGuitar and Drumí, whilst also taking part in various other projects, specifically Sharp, in which he reunited with Buckler for a single entitled ‘Entertain Me’. Foxton then quit Stiff Little Fingers in 2006, and became part of Casbah Club (with Pete Townshend’s brother Simon), Mark Brzezicki and Bruce Watson of Big Country, supporting The Who in the U.K. The following year, the seeds of From The Jam were sown.

In 2007, Foxton joined Buckler in The Gift, a band that exclusively played material from The Jam and was fronted by Russell Hastings, the only frontman to work with both Buckler and Foxton since Paul Weller. With Foxton, he acted as a co-writer on his last album ‘Back In The Room’, which reached number 21 in the UK charts. Hastings even collaborated with Paul Weller in the studio in 2011.

The project eventually shape-shifted from The Gift to From The Jam, as Buckler left and various incarnations materialised with different members, among them Mark Brzezicki on drums. Hastings gained further experience in this realm with the classic material, performing it with respect and admiration. His passion and understanding of The Jam’s history and legacy is second to none, and as frontman of ‘From The Jam’ he sees the songs in a completely new light.

“It’s spine-tingling to play those songs. I’ve always treated them as if they’re my own children, and have felt like I’ve got a responsibility towards those songs, and a responsibility towards the legacy of The Jam. I treat them with the utmost respect, and lots of energy, As a result, oddly enough, I understand them a lot more these days. Lyrically, Paul was very advanced.”

Fans of the band have accepted Hastings as a man that fills Paul’s shoes supremely well and delivers the classic Jam material with legitimacy and skill. He and Foxton, along with new drummer Smiley (who joined the enigmatic trio in 2013, and comes from a background of working with Joe Strummer and Robbie Williams, along with European stadium band Archive), solidify the present incarnation of the project, which is currently at the peak of its powers.

From The Jam are one of the most hard-working bands in music. While most bands tour for set periods at a time, they tend to do it all year round, Russell Hastings explains, “I think it’s testament to the strength of the songs that we can tour that much. It’s just great that there are so many fans out there that love the music of The Jam.”

Adding to that live sound on tour is Tom Heel on keyboards. Hastings explains how he became a part of the project, “we met him at Paul Weller’s studio; he was playing on Paul’s new single, on drums, so he comes from a good pedigree. It just means that when we play live now, there’s a big four piece on stage. It fills out the sound.”

Their commitment has been paying off big time. Crowds have been expanding, and their name has gradually found itself moving up festival bills, “the numbers – as far as the crowds – have just been getting bigger, which is great thing for us. You get really fired up from those fans” Hastings says, “it’s been great, and also, it’s paid its dividends back in the venues now. The band feels on fire.”

Also included in the set are tracks from Foxton’s acclaimed ‘Back In The Room’ record – a song from which (ëWindow Shoppingí), was used on an episode of Top Gear – strengthening their position as their own unique, independent entity. This independence has become no more apparent than recently, as the bandís versatility and professionalism has allowed them to play a multitude of different shows, deviating from an acoustic tour ‘That’s Entertainment’, to a greatest hits set ‘The Public Gets What The Public Wants’.

Hastings explains these different types of show, “on the ëThat’s Entertainmentí tour, we do anything that was acoustically done by The Jam, or just anything else we feel like doing acoustically, along with a Q+A session. ëThe Public Gets What The Public Wantsí tour is very different. It’s basically the big festival set, all the hits, hit after hit, straight away. Oh and there’s also the ëSetting Sonsí tour, in which – because it’s the 35th anniversary of the album, we play the whole of ëSetting Sonsí in its entirety, and then finish on loads more hits.”

At their essence, From The Jam are a band keeping a spirit alive, a spirit that should be preserved. Since the 70s, The Jam’s music has punctured the airwaves with its power. From The Jam don’t rehash that power. Instead, they keep it going, they celebrate the material, and even give the crowd some new stuff. Hastings states simply, “I want to sing those songs as I remember them.” From The Jam enables that to happen, and crowds across the world – for years to come – will sing them right back.

In November 2015 Bruce and Russell announced that they were returning to the studio to record a new album ëSmash The Clockí. Scheduled for release in October 2015 the news was announced on crowdfunding site PledgeMusic, with Bruce saying ìIts [Back In The Roomís] success was made possible by Pledge Music and, in turn, by you the public getting involved, for which we canít thank you enough. The initial demos are sounding great and Russ & I canít wait to start recording in early January. As on the last album we will have a few guest appearances, which weíre really excited about.î